A message from Daniel Kolenda about COVID-19
Keep updated on COVID-19: sacoronavirus.co.za

Would you like to switch from South Africa to United States? 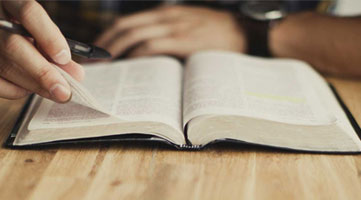 The apostle Paul went to the areas of Europe where no Christian believers existed and preached the gospel in an open attack upon the vast, entrenched culture of paganism. The emperor himself was the chief guardian of all the gods, yet the apostle of Christ challenged the whole ancient world and rejected the strength and impressive array of a cruel world empire. Instead, Paul knew his God “always leads us in triumph” (2 Corinthians 2:14). This unknown Christian, a lone little Jew, found Europe and Asia full of fear—fear of spirits and omens, fear of their vengeful and moody gods, fear of the heavens above them and the depths beneath them, fear of the future, fear of the mysterious world around them. Its millions bowed in spiritual darkness under a morbid dread of death. Paul’s fear of God placed him on higher ground, and he said, “For to me, to live is Christ, and to die is gain” (Philippians 1:21). These are the triumphs of faith! Writing to Rome, the capital that exercised the iron hand of world domination, he said: I am persuaded that neither death nor life, nor angels nor principalities nor powers, nor things present nor things to come, nor height nor depth, nor any other created thing, shall be able to separate us from the love of God which is in Christ Jesus our Lord. (Romans 8:38–39) The New Testament usually uses only one Greek word for fear, phobeo. Jesus said, “Do not have phobia, have faith.” Jesus had no room for cowards. He said, “Do not fear those who kill the body but cannot kill the soul. But rather fear Him who is able to destroy both soul and body in hell” (Matthew 10:28). Once or twice, another word for fear is used, the Greek word deilos, which means fearful, timid, or even cowardly. Jesus said, “Why are you fear¬ful, O you of little faith?” (Matthew 8:26). We read in 2 Timothy 1:7, “For God has not given us a spirit of fear, but of power and of love and of a sound mind.” The word deilos is translated “cowardly” in Revelation 21:8, which seems correct, because it joins deilos people with unbelievers, murderers, those who commit abominations, and other major sinners. Benaiah went down into a pit on a snowy day and killed a lion—a rare act of courage. His decision to face a desperate and hungry lion in midwin¬ter, in a pit where Benaiah could not run away, revealed he was truly one of David’s men and, like David, a man of faith. Yet Jesus found His own dis¬ciples so mistrustful of Him that they became cowardly in the storm. He was appalled by such unbelief. They knew better, and one of them, Peter, later got the measure of the devil. (See Matthew 16:23.) James said, “Therefore submit to God. Resist the devil and he will flee from you” (James 4:7).